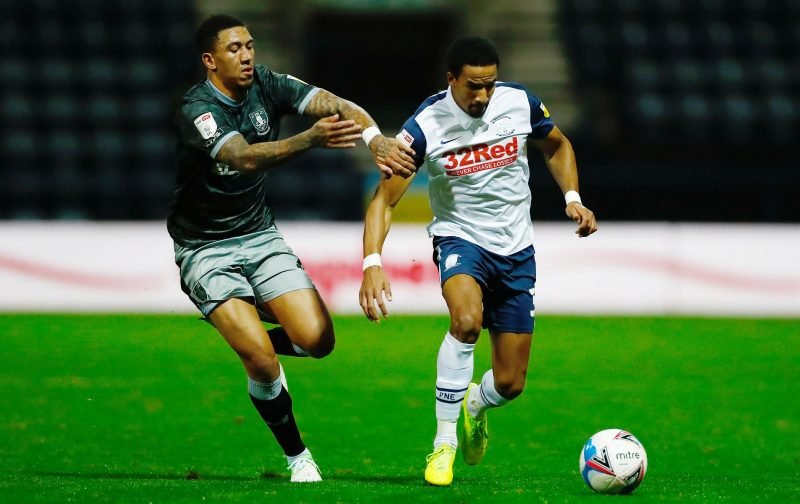 It was a mixed bag of a week for Preston North End this week. Having bounced back from the 4-1 loss to Hull by claiming a 3-0 victory over Mansfield Town in the EFL Cup, they then couldn’t follow it up in the Championship and fell to a 2-1 defeat at Reading.

It’s left us bottom of the table with two games played and heading into a midweek league tie against Huddersfield Town.

Some familiar faces came back into the side and impressed while a youth player in Joe Rodwell-Grant was given a substitute appearance in the cup. However, come the end of the week, it hasn’t been a great week to be a PNE fan.

Nevertheless, with both the cup and league games taken into account during this game week, here are our updated player power rankings. Whether they have moved up or down is in brackets next to the players name.

The former Celtic man was our top goalscorer last season and got off the mark straight away this campaign by bagging two goals in midweek against Mansfield. He looked every bit as clinical of a finisher as he did last campaign and proved that he can’t be questioned in terms of his ability to bag goals.

However, in the game against Reading he was quieter and had a few efforts but nothing that really troubled the goalkeeper. His efforts in midweek and his attempts to score against Reading claim him this spot but he’ll need to do more in the league to keep top spot.

Playing in both games this week was DJ, who made a sub appearance last week that showed how creative he can be. He once more showed what he is capable of and looked our most lively and creative player against Reading despite the defeat. He looks like one of the only players in the current side that is capable of breaking through the opposition lines with his passing and he even bagged a goal from the penalty spot to boot.

Comes straight into the rankings at third for his solidity during the Mansfield game. North End looked like they were on the back foot at times against their opposition but the German helped shore up the defence and kept a clean sheet in the process. It led to questions as to why he got absolutely no gametime in the match against Reading – but he looks our most solid centre-back option currently off that one game.

Riis didn’t have a bad gameweek by any means – in fact, the striker bagged a goal against Mansfield to take his tally to two goals in two games at the time.

However, with others shining brighter in the game against Reading (largely due to the forward not getting many chances and cutting an isolated figure) he falls slightly in the rankings. Still he looks our best out and out striking option.

Potts has benefitted from others having a bad gameweek but also because of his quiet solidity on the ball so far this season.

He was bafflingly thrown up front at one point and had a great chance to bag a late equaliser against Reading but when he’s had time on the ball he’s one of the only players to have looked composed and relatively decent with his play – despite many continuing to use him as a scapegoat.

Maguire started his first game of the campaign against Mansfield and looked bright at times despite not scoring. He then had to make do with coming off the bench against Reading and although he doesn’t appear as clinical as he once was, he created some good chances here and there and certainly threatened the Mansfield defence when we were on the front foot.

Whiteman hasn’t perhaps set the side alight as much as he would have liked yet but he’s at least looked the best of our midfield options so far this season. It was a surprise that he was dropped to the bench for the Reading game but was brought on to try and shore up the midfield and get the Lilywhites pushing forward. It didn’t work as we ended up on the losing side but there’s potential there, of that there is no question.

The Liverpool loanee hasn’t had a bad week by any means and in fact, he looks like one of the only certain choices out of our defensive line so far going forward. He isn’t a right-back and he has looked a bit shaky given that role at times but his runs up and down the wing have been better than most other options in the absence of Matthew Olosunde.

To be fair, part of the reason he’s fallen arguably comes down to unranked players performing well during the gameweek. He’s a decent option but is still yet to reach the heights of the last campaign.

Iversen is another who hasn’t looked maybe quite as impressive so far as he did last season. In mid-week, he made some good saves and kept a clean sheet but then he was beaten twice by Reading on Saturday.

Although not always his fault – some of the passes through our defence led to one-on-one chances where it was arguably harder to miss than score – he still hasn’t reached the same heights either.

Cunningham goes up three this week for looking slightly brighter in the Reading game than most of his teammates. He remains our first choice left wing-back and is arguably the best at that job but maybe, at some point, it might be worth giving Josh Earl a go.

Barkhuizen has been isolating this week, so drops down the rankings due to him not featuring. However, without him in the side, it’s clear to see the pace he can bring to the team because without the player we look less threatening going forward.

Lindsay’s stock has fallen quite a lot in a week, with the centre-back looking one of our more solid options last week (especially with his threat from set pieces).

However, some shaky defending in the Reading game has led to him dropping to 12th – and he’ll be hoping to bounce back against Huddersfield.

The striker only made a substitute appearance against Mansfield, but he was bright enough in his cameo to secure his spot here. He looked full of energy, lively and even managed to threaten the keeper with a shot when he came on.

It looks like it could be a good season for the youngster – he just needs a start or more appearances at least to showcase his talent.

Another player who falls down the rankings due to no appearances. The goalkeeper is out with a concussion and it means he didn’t feature at all this week.

Browne is usually dependable and versatile and although he has looked okay at times, he’s so far failed to hit the same heady heights he has set himself in past seasons.

Whether that comes down to him being played more centrally than attacking is another question but he was shaky against Hull and didn’t look himself against Reading.

We know Jordan Storey can be – and has been – capable of brilliance and solidity in the past. This season though he is still yet to get going.

He’ll need to try and push on soon, as it looks like he’ll be a trusted member of the defence this season – and with the potential he has, we know he could be a key member of the side. He just needs to show it.

The former Bamber Bridge man came on for a brief appearance from the bench against Mansfield in the EFL Cup. Yet to be really given a proper chance, he played okay when he came on but didn’t have much time to do anything of note.

Andy Hughes has been tried as a left-back and a centre-back and although he has shown early promise in a central role, he was another defender who had a torrid week against Reading.

He was at fault against the Royals and was beaten far too easily at times. He’s proven he can be a decent option – but this week is one he would probably rather forget.

Evans is another player who missed the game against Reading with a knock and after a below average game against Hull, he finds himself hurtling down the rankings. If he comes back in for Huddersfield, he could soon rise up them again though with a good enough showing.

The biggest ranking surprise of the season so far is Ledson, who was our player of the season in the last campaign. He’s capable of absolutely fantastic football and moments of brilliance. But in the Championship games he has played so far, he’s looked a quiet bystander in the middle of the field and hasn’t been half the player he was.

He’s got it in him – so hopefully he’s back to normal soon.